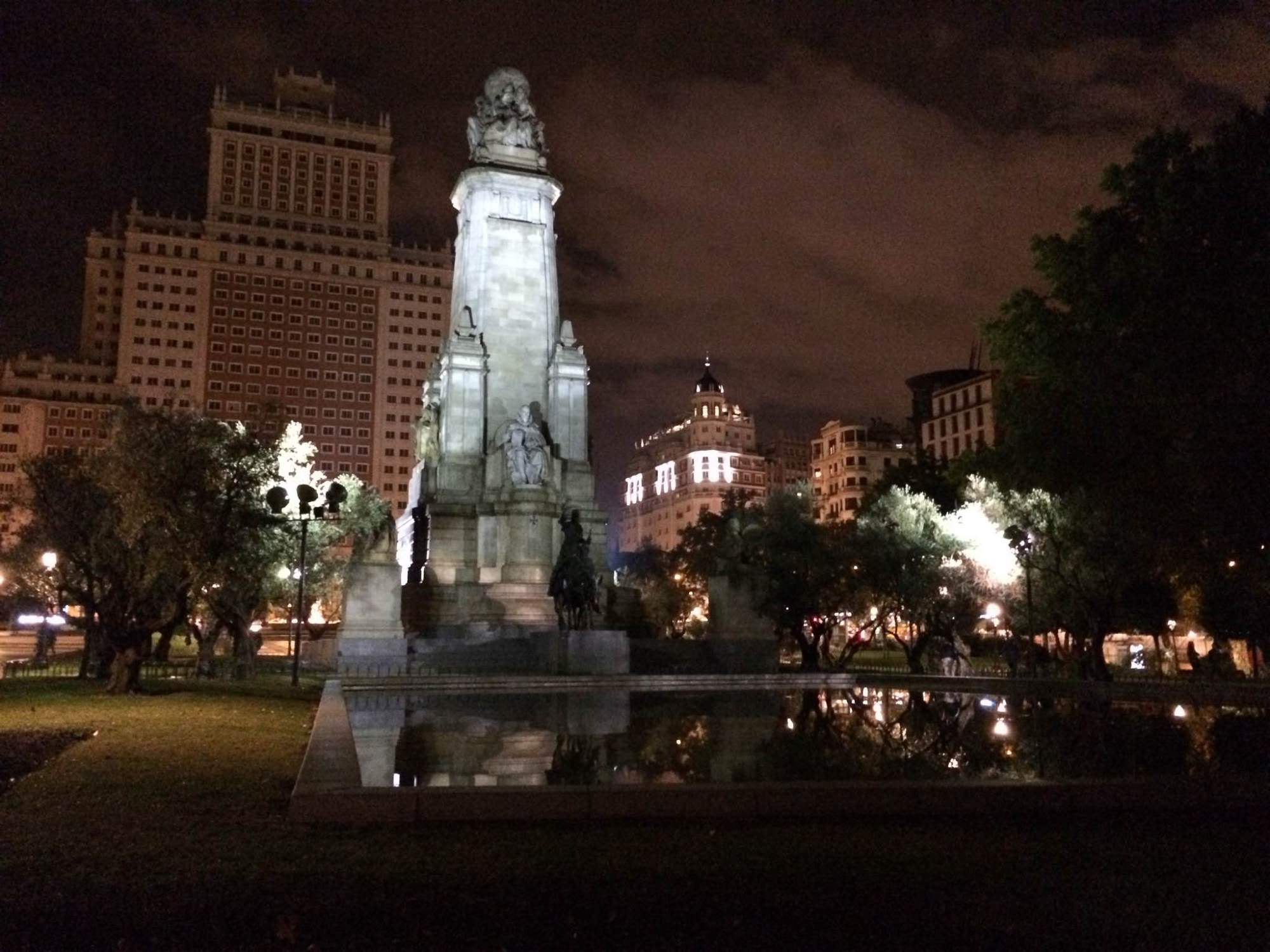 This title quote is misleading. In fact, this entire post might be misleading. I was in Madrid for about 12 hours, and it rained for a third of those (you’re welcome: no rain-in-Spain quotes), so I did no “killing of the night.” What I did see of the biggest city in Spain and her capital is beautiful. Our bus pulled into Madrid in early evening just as the sun was going down. Aside: time is weird in Spain – every activity is later than anywhere else I’ve been (i.e., lunch at 2, dinner at 9, etc.). And the actual hours are off – geographically they should be on Greenwich Mean Time, but they are on German time instead. Franco changed it in 1940 to be like the Germans, and it never got changed back. So sunrise is like 9 AM. /aside

The bus dropped us at our hotels near the Plaza de España (a theme that will be repeated often this week – every city has one). I checked in, checked out the balcony, and wandered over to the Plaza. I saw no fewer than four couples making out on this 7-minute walk. Apparently the Don Quixote statue is quite the mood-setter. I was starving and eager to try some Spanish food, having arrived too late the night before to do so. I went into a tapas bar, was greeted with “Buenas tardes” (good afternoon) at 8:45PM, told the bartender to sit down and ordered a Tortilla España and a sangria. They also brought over some cured ham gratis. (Later on the trip at a different restaurant, I was charged a couple Euros for a basket of bread I didn’t request, so I don’t really understand the logic of it all). The Spanish Tortilla was excellent – spun gold made out of just eggs and potatoes.

Now, of course I didn’t mean to tell the bartender to sit down and didn’t even realize I’d done so until I was happily eating my meal. It does explain the somewhat bemused looks he and the waiter gave me as I was led over to a table. But it turns out the only form of the verb “to sit” I know is the command to another person. After many years of study, my Spanish is terrible. I realize it’s terrible because I don’t practice actually speaking it to another human being. And this is the crux of language: you have to speak it to know it. You have to be willing to sound like an idiot and pantomime your way throught a conversation until you get somewhere. My pride gets in the way every time. I don’t want to sound like I don’t know what i’m doing or saying. But the struggle is the thing. And this is a struggle I’m going to have to get over real quick, especially when I get to any of the next places I’m headed where English is not the first language.
In the morning, those of us at the 3-star hotel (the other half of the group was at a 4-star, hereafter known as “the richies”) were waiting patiently in front of our hotel for the tour bus when a Julia bus turned up. A woman in a yellow pantsuit with cheetah heels and scarf got out, loaded 8 people of those of us standing there, said, “your bus will be along,” and drove off. Bizarre. And a little disappointing because at the very least, tours with this lady would not be boring. We continued to see her periodically throughout the week, and her outfits got more entertaining, if you can believe it. Anyway, our tour bus with our excellent guide Hugo showed up a few minutes later, and we set off for Cordoba in a not-completely-full bus that was a vast improvement over the previous day’s conditions. Check back tomorrow for more details about my visit to Cordoba.
Title quote: Ernest Hemingway, Death in the Afternoon