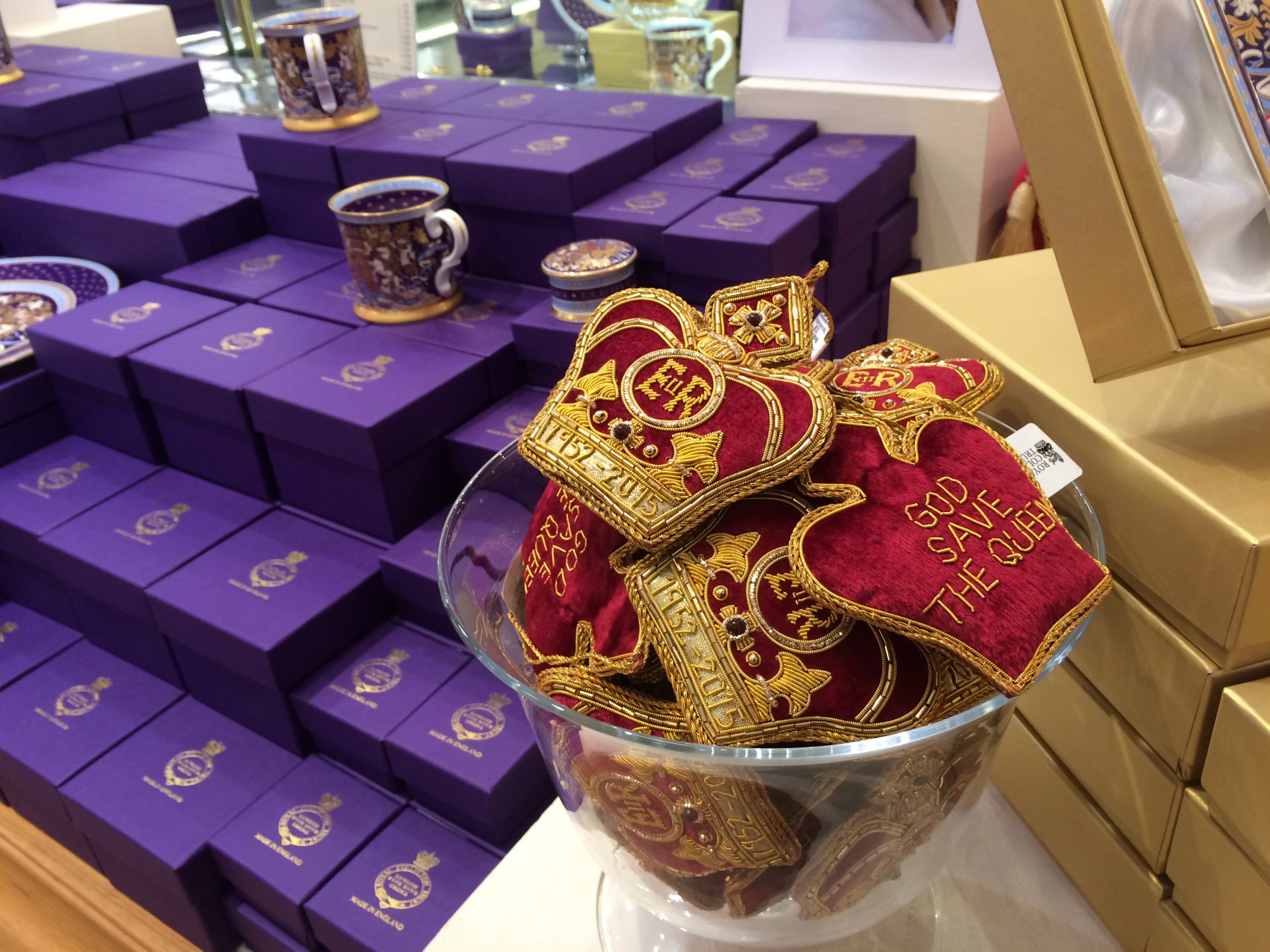 Today Queen Elizabeth II becomes the longest reigning monarch in England, beating out her great-great grandmother’s record of 63 years, 7 months and 2 days. My friend ST and I visited Buckingham Palace last week during the Summer Opening – a month-long opportunity for UK residents and visitors to see one of the oldest working palaces in the world and Queen Elizabeth’s primary residence when she is in Westminster. Unfortunately no pictures are allowed on most of the tour, but I included a few of the exterior, the gardens and St. James’ Park.
The interior of Buckingham Palace is almost exactly what I expected – the 19 state rooms on the tour are lavishly decorated and contain some exquisite art. You get to see the throne and her state carriage. There are also displays that show the preparation and presentation for a state dinner, in this case the last one, for the PM of Singapore. The trivia here is immense: the staff measures each place setting using special rulers! 6 wine glasses per guest! each table setting has its own little spotlight! every two guests share a menu! every four guests share a salt and pepper set! the Queen has an onsite milliner and dressmaker!

One of the more fun displays was of some of the gifts foreign dignitaries have brought the Queen over the years – from French dishes to a metal scale reproduction of a Tibetan temple to an enthusiastic rendering of English culture by Mexican artists. The iPod from the Obamas was not in the display. You also get to see the rear of Buckingham Palace and a portion of the 139 acres of gardens.

Personally I find Queen Elizabeth II to be a fascinating individual. I’m an American, and we don’t have titles of nobility. We just hand the microphone over to the loudest guy in the room or the richest, or in really special occasions, both in one. And agree or disagree with the value of the monarchy, it’s hard to dispute the significance of Queen Elizabeth herself. She is the head of state for 139 million people in the UK and the 15 commonwealth countries.
She was born after the Great War ended; her childhood was marked by the Abdication Crisis wherein her uncle abdicated the throne to marry an American divorcee, prompting her father’s unexpected ascension. Her immediate family has been credited with raising morale in London during the second World War by staying in town during the Blitz, and Elizabeth herself served as a mechanic during the war. She ascended the throne in 1952 and raised four children while on the job. In the 63+ years since, she has demonstrated a commitment to duty and country that even her critics can’t deny. She has also managed what seems like a pretty happy, 68+ year marriage to a man who by law cannot hold a title greater than hers. Say what you want about the matching hat and coat (my vote? fabulous) or the other royal trappings, the queen is a lasting symbol of Britain. I will be raising a pint in her honor this evening.
Title quote: Queen Elizabeth II, then Princess Elizabeth, in a speech in South Africa on her 21st birthday, in 1947. Read the full transcript or watch the speech.