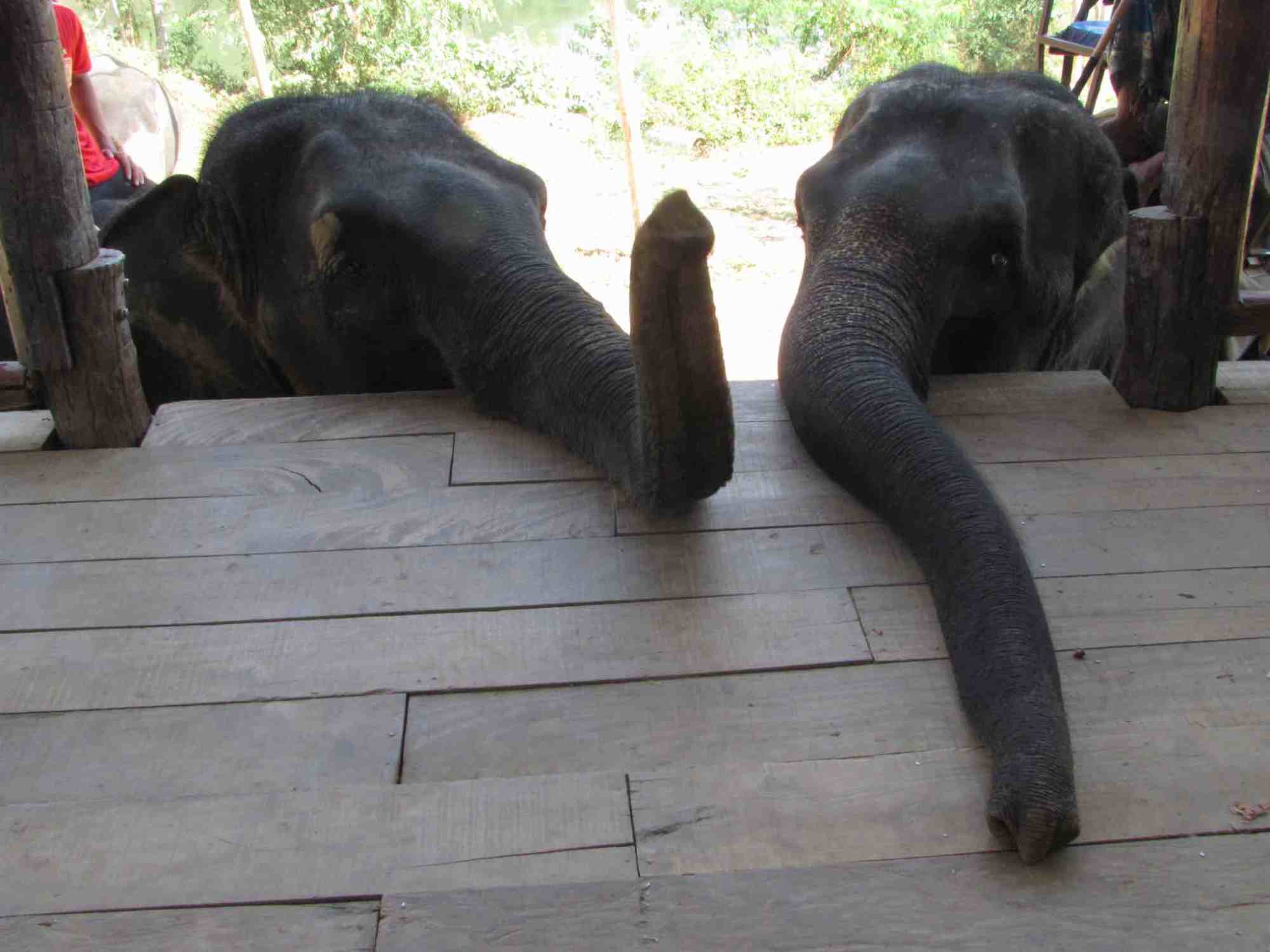 After our time at the Tiger Temple, ST and I headed over to an elephant village to ride the elephants. Again, I did very little research before this adventure. We thought we were making a better choice by riding the elephants bareback, but it turns out that riding the elephants at all is bad for them. Though these animals are massive, carrying humans is very hard on them. So once again, I’m writing this post to encourage others not to ride the elephants if presented with the opportunity. But, as with the Tiger Temple, I’ll describe my experience as best I can.

These animals are incredible – looking into their warm brown eyes felt like seeing a depth of experience and calm that was remarkable. My elephant’s name is Fanta, which is a ridiculous name for an elephant and yet fitting. He had an exuberant personality and seemed quite playful. That is probably my imagination – the reality is that these animals have most of their personality trained out of them at young ages through rather violent methods.

After we climbed onto the elephants from an elevated platform, our elephants trudged off down the hill toward the River Kwai (yes, that River Kwai). The elephants went right into the river, with us in tow. At each mahout’s command, the elephants moved, and into the river we went. The great animals then picked each of us up with their trunk and dunked us again after raising us up high above the river’s surface. It was one of the weirdest experiences of my life, but I was laughing so hard that I couldn’t process the experience at the time. I think we could have done that for a couple hours, but in reality it was probably just 20 minutes or so: grab, lift, dunk… over and over. Finally, we climbed back onto the elephants’ backs and they moved out of the river. At that point, ST jumped onto Fanta with me (at the mahout’s prompting), and we took a ride through the “jungle,” though it was really just a track between some residences.

Riding elephants is not what I’d call a comfortable experience, ethical qualms notwithstanding. Fanta lumbered along at his own pace, and between his shoulders and head, where I was perched, is a strange place to absorb these shocks. His ears tucked back to cover my legs. The whole time I was sort of hunched forward with my hands on his head to maintain my balance. And I always think of elephants as smooth-skinned, but Fanta was covered in 3-inch stubble.

My conclusion after this experience is that riding the elephants is not worth the risk to the animals, so go to a place that is committed to providing a safe place for these beautiful creatures to thrive if you want to interact with them. Don’t come away from your visit with the sinking feeling that you contributed to a system that harms animals.