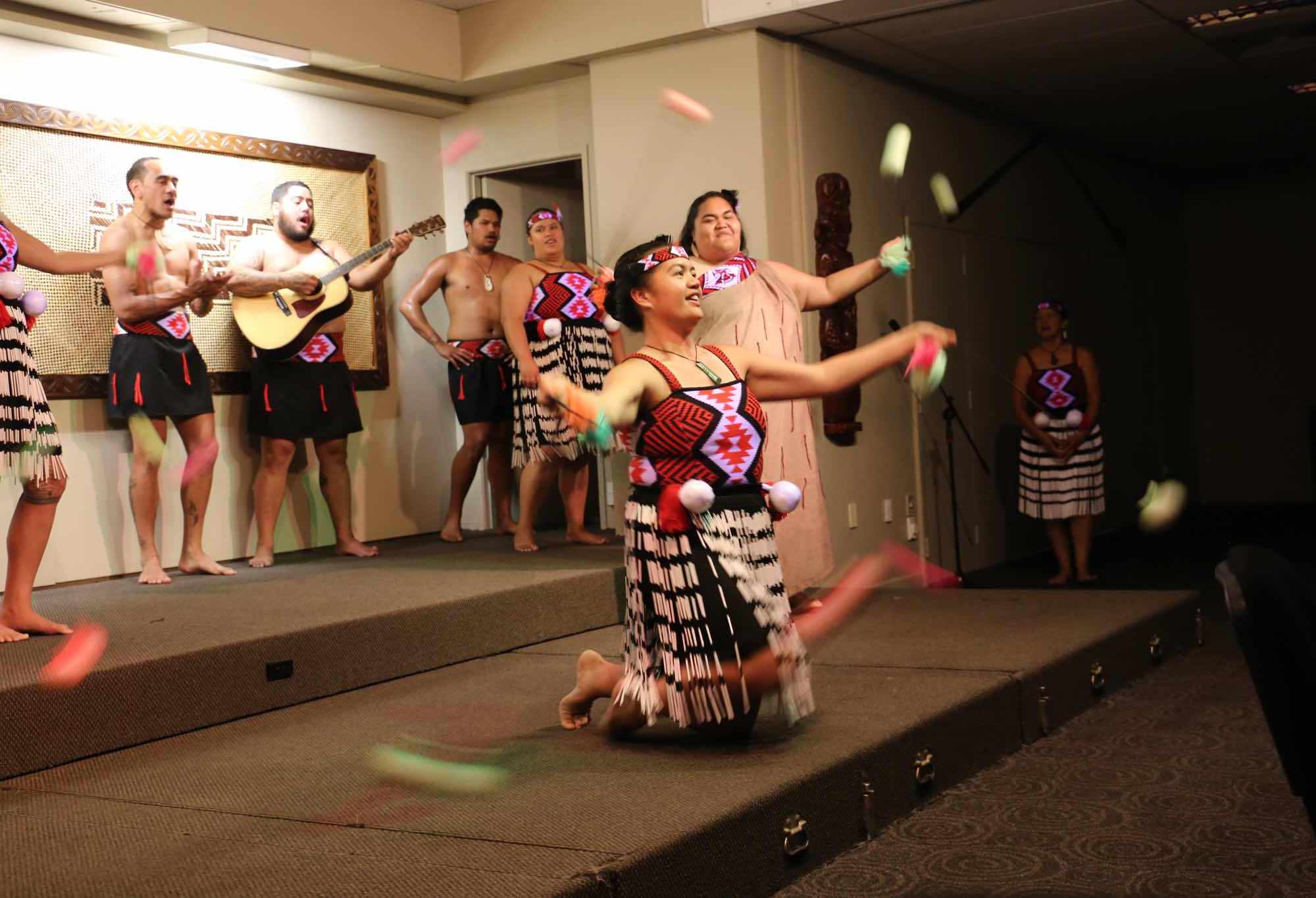 On one of our nights in Rotorua, we were able to attend a traditional Maori hangi, a meal cooked underground using the heat from the geothermal features of this area. There was a variety of locally sourced food, and it was all delicious. The hangi also included a performance of Maori songs and traditions, like poi dancing, the haka and titi torea.

The Maori followed an oral tradition until fairly recently, so storytelling was culturally very important. They used songs and stories to record their history for future generations. Many of their famous stories, like Maui’s fishing expedition, explain how their world came to be. Other stories recount brave deeds of their ancestors.

The night began with our “chief” accepting the tribe’s offer of friendship. Maori chiefs had to be men, but the reason for this is not what you think. The chief would be venturing into strange lands and encountering hostile peoples, so he might get killed. It was important that the chief be expendable for these reasons, and women are not expendable. Maori believed one woman was worth 20 men. I think you can see why I enjoyed learning more about the Maori at this point.

Until a couple hundred years ago, the Maori were also cannibals – so if they won a war against another tribe, they would kill and eat all the male warriors but one skinny guy. He would be sent back to his village to bring the women to the new tribe. The women, of course, would be well-treated and allowed to marry into new families in the new tribe.

Probably the most famous aspect of Maori culture is the haka, the traditional war dance. The New Zealand All Blacks, the current world rugby champions, perform the haka before every match, no matter how many Maori team members there are at that time. Watching a group of giant guys perform this fierce war dance gives you pause. It’s not the kind of thing you’d want to encounter getting off a boat onto an isolated island for sure. The Maori performers took a group of volunteers on stage to learn the dance themselves, and though the guys tried, they were nowhere near as terrifying as the Maori.

Women in Maori culture learn how to dance with a poi, a ball at the end of a long or short string. The Maori women could negotiate several of these things all at once while singing and dancing, which was extremely impressive to watch. These ladies had some great singing range, too. Not to leave the ladies in the audience out, they also took volunteers to learn the poi dance, which was also entertaining to watch. Most of the women picked it up pretty quickly.

The titi torea demonstration was pretty amazing to watch as well. This is the game our group tried to learn at the Te Puia cultural centre the day before. It took us what seemed like forever just to get the basic moves down for 20 seconds without a mistake. The Maori performers did a lot more complicated sequences much faster, and it was mesmerizing.

One of the songs focused on a famous Maori couple from the Lake Rototura region, Hinemoa and Tutanekai. Hinemoa was the daughter of a great chief and very beautiful. Tutanekai was a warrior but not highly ranked enough to request Hinemoa’s hand in marriage. Neither of them were certain of the other’s feelings. He lived on Mokoia Island, the island in the middle of Lake Rotorua. Hinemoa’s father had forbidden her to travel to the island in a canoe, so she decided she would swim the 3.2 km to tell Tutanekai of her feelings. She strapped empty gourds to herself as a life preserver and set off, guided by the sound of Tutanekai’s flute. When she arrived on the island, she hid herself in a hot pool along the shore until her love’s servant came to get water for his master. She disguised herself as a man and made the servant give the gourd to her, drank the water and broke the gourd. She did this several times until Tutanekai himself came to figure out what was going on. At this point, she revealed herself to him, he covered her with his cloak, sealing their marriage, living happily ever after and all that. I guess it helps that she brought replacement gourds for the ones she broke. It seems to me that Romeo and Juliet could take some lessons from this story.

Title quote: “Te Ika A Maui” or “The Fish of Maui”, the Maori story of New Zealand’s North Island’s founding, printed on the placemat at the hangi