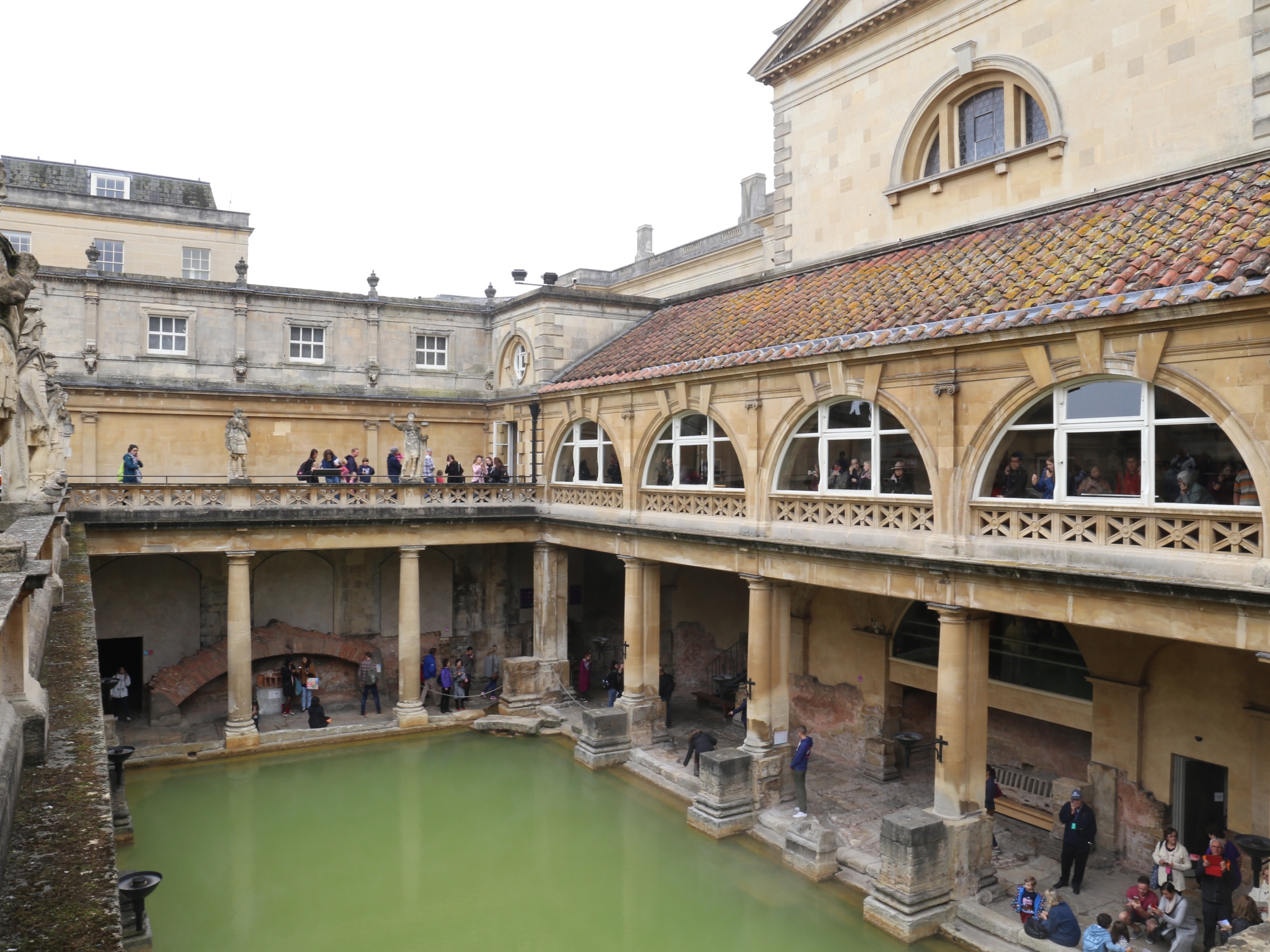 The idea of Roman conquest in Britain began with Julius Caesar who, on his first foray to the island during his wars in Gaul, took one look at the white cliffs of Dover and decided not to land there. He claimed supply problems prompted his decision, but realistically he just didn’t want to tangle with the Celts and Britons.

Caesar’s second incursion and subsequent Roman conquerors were more successful, and modest settlements grew on the island. Londinium is the most famous, but two other major ruins remain to tell us a lot about what life was like in British Rome: Hadrian’s Wall in Northern England and the Roman Baths at Bath in the West. The Romans knew Bath as Aquae Sulis and built an entire temple complex on the site. They considered the naturally occurring hot springs a gift from Sulis Minerva. What struck me most about this site was the size of it, not just the portions that have been excavated, though those are impressive, but how giant the whole thing would have been during the Roman period. The museum has some excellent dioramas that show the full complex, and I do love me some dioramas.

Speaking of the museum and site, you enter at ground level, in the same pedestrian plaza as Bath Abbey. The building is Georgian, like everything else in Bath, and sports a lovely dome. You get an audio guide as you enter and head out onto the balcony viewing platform around the original Roman bath. This balcony has a series of statues – a sort of Roman Rogues Gallery of men who had some connection to Roman Britain. This balcony and its statues were built when the Baths were first opened for public viewing in the 18th century. Coming from a country founded in the 18th century, I was entertained that the building from then isn’t even the main event here. From the viewing platform, you make your way below ground into the circuitous museum and the remains of the Baths and temple complex.

The museum has a distinct flow problem (at the Baths… irony).

Since Bath is pretty close to Stonehenge, most tour companies do a Bath-Stonehenge tour. So they drop off hundreds of people, give them 90 minutes to see a 3-hour museum and hand them an audio guide. There are simply too many people in too small a space trying to see the same things. I don’t mind audioguides as a rule. I realize they are the easiest way to accommodate lots of different languages, and that’s cool. I certainly hope they have English guides when I go places where the official language isn’t mine. But this is a problem that often happens – if you give people a numbered guide, they feel obligated to stand awkwardly in front of item #1 until they have listened to every word, dammit, regardless of how many people are standing behind them to see the same thing. But for the love of all that is educational, please design the museum to accommodate this or let fewer people in at a time.

However, lest you think I had a terrible time, I was delighted to discover that Bill Bryson, my favorite travel writer, provided some of the segments to the audio guide. If you are unfamiliar with Bryson, get one of his books immediately. I recommend Notes from a Small Island, In a Sunburned Country or A Walk in the Woods (I do call foul to Robert Redford playing him in the movie though – come on, Hollywood). He even reads the audio versions himself, so pick one up. (Bill Bryson has no idea who I am and did not pay for this endorsement). His commentary on the artifacts in the Bath museum was full of his usual dry wit. He declared himself less than impressed with the rare, gilded head of Minerva Sulis herself, stating that she did not look like someone he would want to know. He expanded this to all women in Roman sculpture. He was however quite impressed with the Baths themselves and three of the surviving steps of the temple complex.

The excavations at this site have been ongoing for hundreds of years, so they have a lot of fascinating artifacts on display.

Some of the burial artifacts were interesting if macabre – apparently soldiers would pay dues into a club of sorts for their buddies to pay for their burial rites should the worst happen. My favorite part of the museum was a tiny display of curses – there was a section of the temple where you could leave a written curse against someone in the hopes Minerva Sulis would help you out in your diabolical desire. For example, Docimedis wanted whoever stole his gloves to lose his mind and eyes. This led me to conclude Romans were very good at architecture and vitriol.

As you make your way through the museum, you come upon what they have found of the original temple grounds – mostly a few rocks piled on one other and some entry points for the hot springs. These rocks don’t seem like much on first glance, but when you realize how old they are and what they tell us about Roman life, they become much more impressive. There’s the altar stone and a stone dedicated to a Haruspex, the guy who did auguries (reading animal innards for signs) – the only mention of one in Britain – and the original steps mentioned above.

After the museum (and a gift shop), you get to the Baths themselves.

The Baths have the original lead lining and are still watertight today after 2000 years (see: good at architecture). They look much as they would have then, with one important exception – the Roman Baths were ensconced in a building with a giant dome. So the green color we see today is new-ish and from the algae the sunlight encourages to grow. The rooms to either side of the main Baths are also mostly intact, so you can see the various temperature pools, too.

Romans took their baths very seriously and had a standard process – going from pool to pool to acclimate their bodies to the progressively warmer temperatures prior to bathing and then a frigid pool to close their pores when finished. The Baths were not just a hygiene exercise but a social outlet and opportunity to conduct business. Sort of like golf now, only you happen to be naked and potentially covered in oil a slave will scrape off you later.